In partnership with the EU Commission and the National Bank of Greece, the city of Athens was the 2017 hosting city of THE European Crowd experts' conference with 400+ attendants taking place on 21 Sept 2017. Stakeholders from all 28 European member states represented by dedicated Country Patrons will gather to discuss diverse scenarios of crowd-disruption from the fields of practitioners, academia and politics. Prof. Christian Piska, internationally recognized Expert and Of Counsel with Stadler Völkel Attorneys at Law was asked to attend the event as a speaker on several occasions.

He took part in the Blockchain Panel at the main stage with an inspiring speech on the topic "Crowdfunding & Blockchain: A Perfect Match or just Hype?", pointing out that, to create the perfect match, a smart regulation, creating sandboxes for business role models and involving a harmonised approach on a European level is needed in order to create a safe legal framework which attracts start ups as well as users and investors. This inspiring talk can be viewed as the second speech of #After Lunch Sessions.

Participating in the main stage discussion on „The crowd-based Blockchain as a path to Artificial Intelligence“ together with Michael Gebert, Founder Crowd Mentor/Crowd Dialog, Michael Psalidas - CEO CrowdPolicy, Alejandro Gómez de la Cruz Alcañiz - Cofounder at Icofunding, Piska emphazised the democratic approach of blockchain based applications and explained how blockchain technology combined with Artificial Intelligence can enhance project efficiency in nearly every kind of industry and, that way, help tremendously reduce unnecessary communication and transaction costs. This main stage discussion can be viewed after the fourth speech of #After Lunch Sessions.

Together with Austrian Country Patron Reinhard Willfort, MD Innovation Service Network and Jens Rockel, Deputy Head of Innovation Financing Unit Fraunhofer, Piska moderated a Blockchain Masterclass about „Blockchain and the next generation of early stage innovation financing“ where he presented the legal perspective of the Austrian ICO model introduced by Stadler Völkel Rechtsanwälte based on Piskas findings. 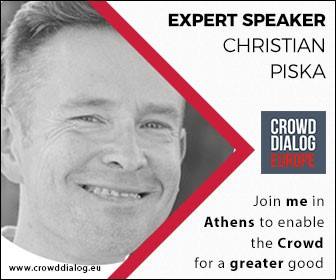